Samson Amore is a reporter for dot.LA. He previously covered technology and entertainment for TheWrap and reported on the SoCal startup scene for the Los Angeles Business Journal. Samson is also a proud member of the Transgender Journalists Association. Send tips or pitches to samsonamore@dot.la and find him on Twitter at @Samsonamore. Pronouns: he/him

After a two-year pandemic-induced hiatus, the L.A. Auto Show is returning with a crush of Southern California electric vehicle makers debuting cars ahead of next week's show and new ones announcing they will enter the local market for the first time.

While there's a handful of new cars being introduced at this year's show, local automakers have yet to deliver any vehicles to customers and are planning to do so within the next five years.

One of the newest local entrants is Vietnamese electric automaker VinFast. The company bills itself as a higher-end car. It announced this week it would establish a headquarters in L.A., its first American outpost and a key foothold for the company as it looks to bring its electric vehicles to a Western market.

Another newbie in the region's brimming EV industry is Brea-based Mullen Automotive. Launched this year, the company is going after the middle market, with the price on their Mullen FIVE SUV starting at $55,000. It was one of the only electric carmakers to boast its manufacturing is entirely based in the United States –most other builders with local footprints opt to manufacture overseas and then ship to the States for further fine-tuning or regulatory adjustments.

Here's a look at some of the wheels made by local carmakers being showcased at this year's Auto Show next week, Nov. 19-28.

VinFast is a subsidiary of Vingroup, a Vietnam conglomerate that's the country's largest publicly listed company. The firm is trying to make a splash at its first Auto Show this year, springing for a large billboard outside the Los Angeles Convention Center and opting for one of the biggest reveals during the press days.

VinFast will sell two electric SUVs, the VF e35 and VF e36. The company's global CEO Michael Lohscheller said during a presser one of its core values is speed, and not just in terms of miles per hour -- both vehicles will be available for pre-order in the first half of next year, and deliveries are planned to begin in fourth quarter 2022.

The VF e35 is around the size of the Tesla Model Y, and it will have an estimated range of 250 miles. The VF e36 is slightly larger and more powerful, with a range of about 340 miles. Internally, both cars are reminiscent of Teslas, with a focus on minimalist features and a large, central screen. VinFast hasn't yet set pricing for either car.

VinFast is opting for a unique model with its batteries -- it will lease them to customers with the promise of replacing them once they are less than 70% charge and believes that this model can help lower the price point for buyers.

VinFast launched in 2017 and announced this week that it will establish its U.S. headquarters in Playa Vista. The company's manufacturing will be done at its newly-constructed facility in Vietnam, where nearly everything is automated and roughly 1,200 robots control 90% of the production line. Lohscheller also said VinFast plans to have some production facilities in North America by 2024.

With a range of roughly 325 miles and max speed of 200 miles per hour, the Mullen FIVE could be one of the fastest EVs on the market -- and it'll boast a rapid acceleration time of 0-60 in a mere 1.9 seconds.

The Mullen FIVE will cost between $55,000 and $75,000 before incentives and CEO David Michery said during the presser production is scheduled to begin in fourth quarter of 2023. The vehicles aren't expected to begin shipping until second quarter 2024.

Mullen is also working on a line of electric fleet vans and its Dragonfly electric sports car is already available for reservations after debuting in 2019. The car's max speed is a roaring 125 miles per hour and its range is about 236 miles.

Anaheim-based Edison Future will be at the Auto Show to showcase its two vehicles, the EF1-T electric pickup truck and the EF1-V electric delivery van.

Both vehicles are solar-powered in addition to being charged electrically, a feature Edison hopes will reel in more customers who might be worried about running out of battery while far from a charging station.

Several models of the EF1-T will be available, with a distance range of 300 miles to 450 miles on a full charge. Edison Future hasn't yet disclosed pricing for the electric truck or delivery van, and it didn't disclose a range for the van either.

Edison Future said during a press conference that it'll begin accepting reservations as soon as this month, and aims to deliver its cars starting in 2025.

Biliti Electric, a new company which launched this year and is based in Culver City, debuted an electric delivery vehicle at the Auto Show, called the GMW Taskman.

The vehicle is designed for commercial deliveries like Amazon and some models are already in use -- CEO Rahul Gayam said in a press conference Taskman vehicles have already delivered 12 million packages.

The vehicle has a range of 80-90 miles, but that can be greatly expanded thanks to a fold-out solar panel, which Gayam said can provide an added 110 miles. "You can rely on the sun for a 100% recharge," Gayam said.

The three-wheeled Taskman can carry loads of up to 1,500 pounds and is being produced by GMW Electric in India. Earlier this month, Biliti announced it raised $400 million from new investor GEM, which it said it will use to grow the business and accelerate its manufacturing to sell on a global scale.

Biliti said it will sell the Taskman in the U.S., U.K, Japan, Europe, U.A.E., India and Africa, with tiered pricing ranging from $4,000 to $8,000 per vehicle depending on the country purchasing (a lower price is available for India and other developing countries, Gayam said).

Canoo makes several electric vehicles including a loft-inspired lifestyle vehicle, a larger multi-purpose delivery vehicle, a pickup truck and one car that's yet to be named or revealed.

This year Canoo decided not to present at the Auto Show, perhaps because it's in the midst of some corporate transitions -- the formerly Torrance-based company announced this week it would move its headquarters to Bentonville, Arkansas and add factory capacity in Pryor and Tulsa, Oklahoma.

Canoo opted for a smaller display at this year's show than usual, showcasing a demo of its lifestyle vehicle that it'd previously debuted several years ago. The company's stock rallied this week after it reported Q3 earnings and CEO Tony Aquila said it would accelerate its delivery timeline, beginning assembly of its vehicles a year ahead of schedule in 2023.

The Torrance-based car company founded by Henrik Fisker in 2016 will spring for a large display of several of its vehicles including the flagship Fisker Ocean SUV. Fisker said it will start production on the vehicles beginning in 2022.

The full-wheel drive Fisker Ocean Sport is Fisker's lowest-priced offering, retailing for around $37,500 and packing 275 horsepower and a range of 250 miles on a full charge.

Fisker will also sell the Fisker Ocean Ultra, which will retail for roughly $50,000 and can go 0-60 miles per hour in a mere 3.9 seconds. The all-wheel drive car will have a range of up to 340 miles and 540 horsepower.

For speed enthusiasts, Fisker is lastly offering the most expensive version of the Ocean, the Ocean Extreme, which will feature a rotating center display and adds 10 miles of charge and 10 extra horsepower to the Ocean Ultra model.

The Ocean cars will begin production one year from today, Nov. 17, 2022. Fisker is contracting a production facility in Austria run by Magna Steyr to do the manufacturing and will then ship worldwide. 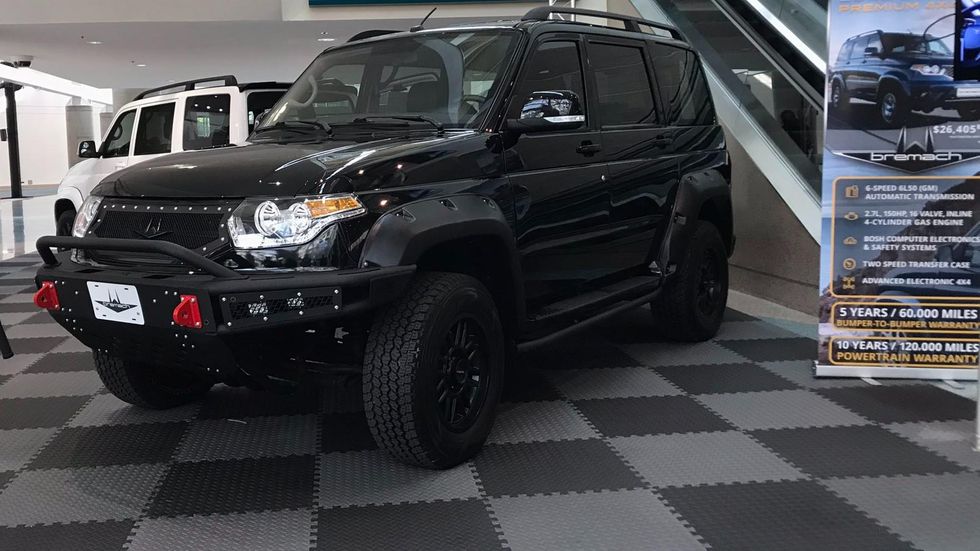 A European-based automaker with an outpost in Costa Mesa, Bremach manufactures its SUVs and pickup trucks in Russia and then assembles and adjusts them for local regulations at its Southern California facility. It's the only company on the list that has a gas-powered vehicle.

Neither car has been released to dealers but Bremach is taking pre-orders now for a planned delivery of 2022.

Unlike most other vehicle sellers, Bremach CEO and co-founder Ray Hoogenraad said the company will sell its cars through dealerships exclusively, so customers can get the full test drive experience. "I don't think it does the vehicle justice when you see it on the internet," Hoogenraad said during the press conference.

Editor's note: An earlier version of this story said Bremach's vehicle was an electric car. It runs on gas.

Samson Amore is a reporter for dot.LA. He previously covered technology and entertainment for TheWrap and reported on the SoCal startup scene for the Los Angeles Business Journal. Samson is also a proud member of the Transgender Journalists Association. Send tips or pitches to samsonamore@dot.la and find him on Twitter at @Samsonamore. Pronouns: he/him

Ford and Rivian Nix Plans to Make an Electric Vehicle Together

Ray Bradbury's Former Home is Now a Rivian Hub. Is It the Future of Car Dealerships?

Five Things You Should Know About Rivian’s Massive IPO

LA Venture: Serial Entrepreneur Spencer Rascoff on the Future of Social Media and His Investing Strategy

How the $2 Billion Case Over Tinder Is Playing Out, and What May Come Next

Behind Her Empire: How Ariel Kaye Launched Parachute With Zero Experience