There's the accelerators and female-founder dinners. Throw in the hyped-up "pledges" rallying public support for inclusion. But, for all the female focused co-working spaces in Los Angeles, the startup scene remains a male-dominated game.

The data tells the story. Female founders received fewer than 10% of venture capital deals in Los Angeles last year, according to an analysis by dot.LA using data provided by PitchBook. When it came to the money, women got even less. Only 2% of the $8 billion in venture capital that poured into Los Angeles companies last year went to female-founded companies. The numbers have moved only a fraction of a percent over the years.

"That is so depressing," said Anna Barber, managing director of the accelerator program Techstars LA, and a coach to founders. Raising capital is "still objectively and relatively more difficult for women and underrepresented founders to raise."

A dot.LA analysis found that the amount of venture capital investment in female-founded companies has stagnated in Los Angeles, San Francisco, and nationwide since 2015. The numbers are stark despite the region's significant efforts to turn the tide.

In Los Angeles, the mayor's office launched PledgeLA in 2018 to incentivize the business community, boosting diversity in the tech and venture capital industries. Backers include the Annenberg Foundation, dozens of LA-based venture capitalists, and tech companies. Another initiative includes All Raise, founded the same year by 34 senior female investors to accelerate the success of female founders. The organization recently opened an L.A. chapter.

"Someone said this to me a couple months ago and it really hit a nerve," Barber said. "For men, making money together has always been part of the culture of male friendship, it's 'I know this guy, he's got this thing, let's do this thing together and it'll be fun.' It's part of how men operate together."

"For women, for female friendship," she said, "making money together has never really been on the agenda. I want to change that, I want to think of the women I know and have relationships together and think 'how can I make money together.'" 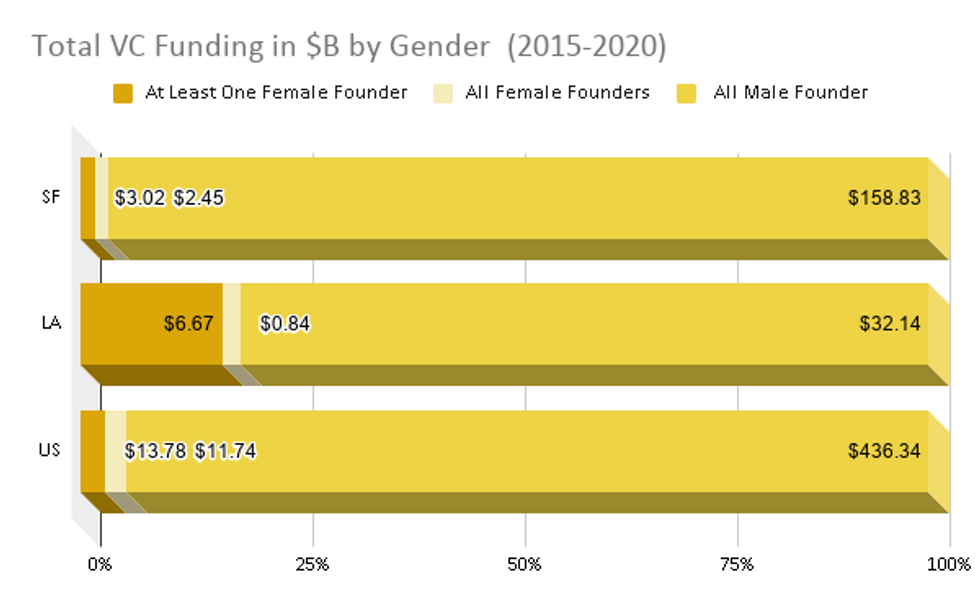 That culture seems to be reflected in the data.


The Los Angeles area has always been an overall smaller market for VC deals compared to San Francisco, with the Bay Area hitting $40.6 billion invested in companies compared to $8 billion in Los Angeles, according to PitchBook. But, L.A.'s traditionally more consumer-focused market has led to better chances for female entrepreneurs who want to receive VC funding.

Women founders in L.A. fared better. But, while they got more deals, the investments were smaller in size. This resulted in less total capital. 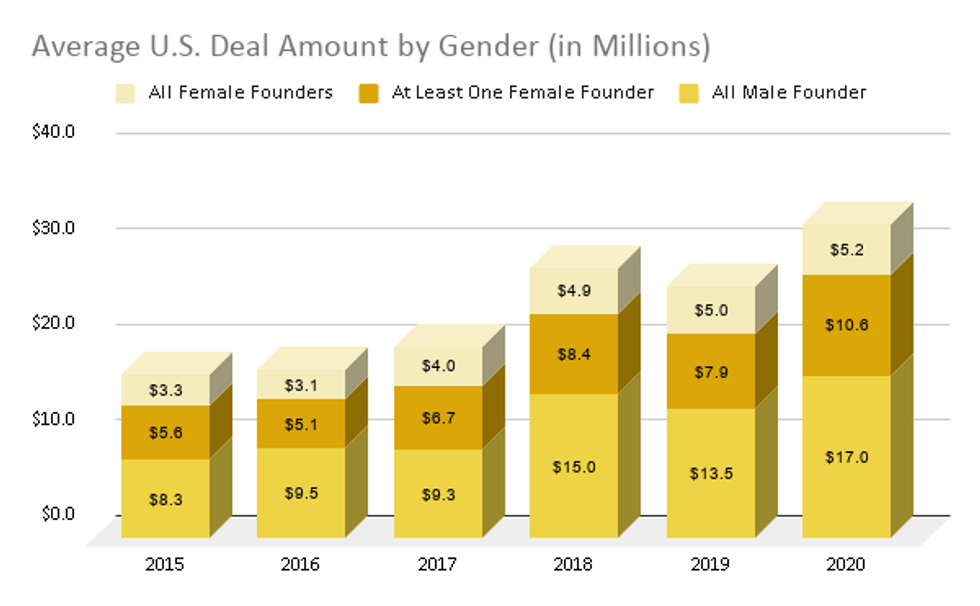 Jennifer Acree, the chief executive of JSA Strategies, a strategic communications firm that works with both consumer tech and digital media companies, is not surprised by the data.


"Look at how many VCs there are and most of them are men," Acree said. "Venture capital has traditionally been a male-dominated industry, just like technology...it just takes time to fix it and people need to see examples of women in the industry."

Michael Silton, managing director of Act One Ventures, said their VC firm has made an effort to identify and fund people of all backgrounds, with 70% of their founding teams including women or minorities. The firm also requires term sheets carry a diversity clause for hiring.

Investing in diverse founders requires outreach to communities that are often overlooked and to founders at early stages more proactively, as well as trying to create a more hospitable and welcoming environment for founders of any background, Silton said.

"One of the things you see is that women often present differently, their degree of confidence in relation to their background tends to present differently, than a man," Silton said. "If you listen, a man sounds more positive and a woman maybe less so, when they are equally capable and maybe the woman is even more capable."

Studies have shown that men are more willing to apply for jobs for which they don't necessarily meet the criteria, while women tend not to apply unless they have all the necessary skills perfected. They've also shown that VCs tend to ask women questions they don't ask male founders.

That puts a burden on VCs to look beyond men they've previously invested in, to be conscious of their biases, to support and coach founders, and to give them equal opportunities, Silton said.

"There are intentional biases, there are unconscious biases, and there's a lack of effort to find different founders," Silton said. "And some believe that to achieve a different outcome you have to start differently."

Barber said that to combat some of this she often tells founders who are women or underrepresented to try to "be the biggest version of yourself" and exude confidence. "Sometimes what gets in the way for people is imposter syndrome," Barber said, "just the idea of keeping yourself small."

It's worth noting that PitchBook doesn't track data on venture investments in companies founded by people of color. The numbers are far smaller when you factor in businesses founded by women of color.

The Case for More Female Investors

"It starts with the capital, and I don't just mean where VC funds are investing, I mean who is investing in VC funds," said Kara Weber, president of Brud and founder of Brilliant Ventures. Weber said the largest shift of private wealth from men to women is occurring globally right now, as people's fathers and husbands pass away. But the challenge is where women put that money. Historically, women have been directed to more philanthropic efforts like the nonprofit sector.

"I've heard women talk about how they will not bat an eyelash at giving $250,000 to the New York City Ballet, but god forbid you suggest investing $25,000 in a startup," Weber said. "I think there were gendered norms around that stuff that we're still shaking off the chains from. The men handle one side and the women handle the other." 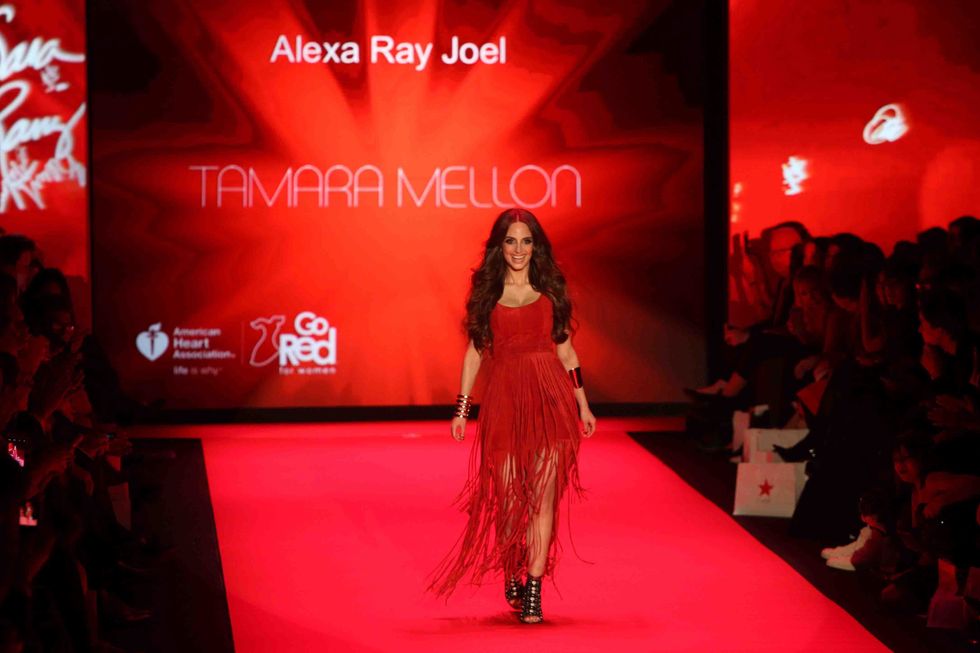 She added that driving women's capital into the innovation ecosystem ultimately will still benefit women investors and founders: "There's so much economic evidence showing that when you do well by women, you do well by the world." Brilliant Ventures has invested in 17 companies; 72% of the founders are women. But even though there have been a lot of deals, "our check size was miniscule," Weber said.

Weber remembers telling a prominent female angel investor that she wanted to raise Brilliant's first fund entirely from women, "She laughed and laughed and laughed, and said, 'I wish the world for you, but I don't believe you'll ever do it.'" Spoiler alert: "She was right," said Weber. "We did get a lot of women investing, but the bulk of our capital came from men."

In 2016, Weber's new L.A.-based venture capital firm Brilliant Ventures was looking to do its first deal, and had the chance to back Tamara Mellon, a new luxury footwear brand founded by Mellon who had previously founded the highly successful Jimmy Choo.

"This deal had everything going for it, it was very well-backed, had a proven founder, and was a category that women investors can understand," Weber said. "And every single woman I took the deal to asked me to speak to a man on her behalf."

One good friend came back and told Weber: "I'm going to do it! My brother thinks it's a no brainer." Weber was dumbfounded. The woman's brother is an emergency wilderness doctor and less qualified on the subject matter than she was to make such a decision.

"We've been so trained to not have confidence in ourselves," Weber said. "That really struck me. These were women, who have plenty of experience buying luxury footwear, they know who Jimmy Choo is and they all still asked me to talk to men, whether financial advisors, private wealth managers, or husbands on their behalf."

Grid110, a nonprofit and accelerator program, has worked to flip the narrative, working with 126 companies over the past five years. About 70% are led by a female founder or cofounder and 60% of the companies are headed by a person of color. So far, 17 companies have raised $16 million and 95% of that is from teams with at least one female founder.

"That's typically the inverse of what you see," said Miki Reynolds, executive director of Grid110 and also a member of the advisory board for PledgeLA.

More women are starting businesses and so there are more female business owners, Reynolds said. But those businesses aren't necessarily the type that has traditionally received VC funds. 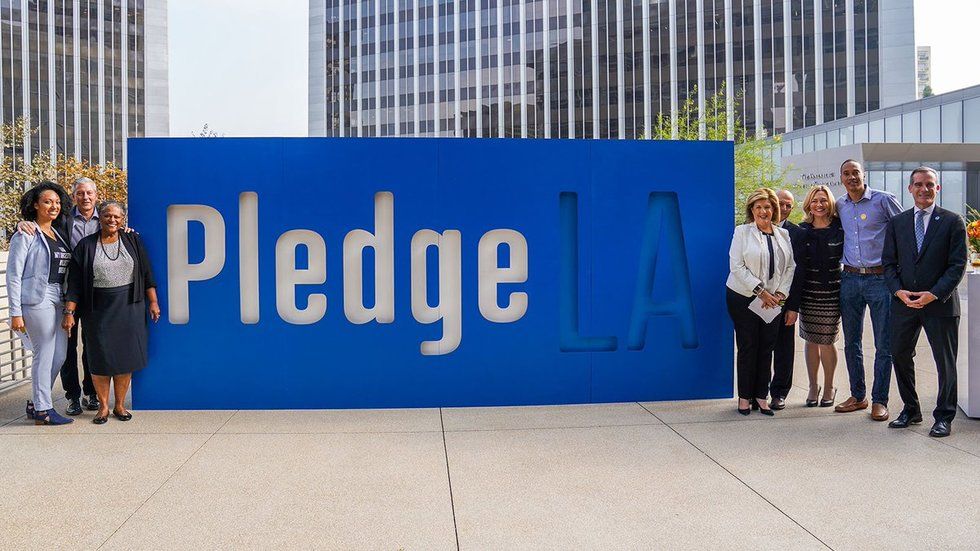 VCs "invest in what scales and forms the size returns they're looking for, which is a certain type of business," Reynolds said.

"I think (the stagnant numbers) goes back to the need for systemic change," Palafox said. "You're going to see incremental improvements, there's some programs that will accelerate the pace. But at the end of the day, bottom line, if you don't have more women investors, you're going to just go at a turtle's pace."

Palafox strongly believes there needs to be strong incentives, perhaps government-backed, to push for VC firms to invest in women.

Barber, of Techstars, said she still feels "a lot of hope" despite the numbers that "we will move the needle."

"Looking at who's writing checks is a big part of it," she said. "Not only thinking about investing in more women but also enabling more women to invest."

Do you have a story that needs to be told? My DMs are open on Twitter @latams. You can also email me at tami(at)dot.la, or ask for my Signal.

At least 30 of the fulfillment centers that power Amazon's e-commerce business have outbreaks of COVID-19, according to news reports and employee accounts. The most recent case in Los Angeles was reported Wednesday, when Amazon confirmed to City News Service that an employee at their warehouse in Atwater Village has tested positive for COVID-19. The mounting cases are sparking walkouts, frustration, and an unprecedented challenge for a tech company that finds itself at the center of the coronavirus pandemic.

Los Angeles locals have always known it is a city of neighborhoods, but this novel coronavirus has made that especially clear. The official lines on where neighborhoods begin and end, and where cases are to be found, have never seemed so murky.

On Thursday, the USC Viterbi School of Engineering released two new COVID-19 data visualizations that aim to make at least where known COVID-19 cases are being found, a little more clear.

The first is an interactive map with reported cases that's broken down by each neighborhood with accompanying statistics that tells people where cases are, how many are out there, and how their neighborhood ranks.

The visualized data is not a complete picture of all COVID-19 cases as testing has thus far been very limited. The data also doesn't break up or provide the total numbers of those tested per region.

Here Comes The Aigency, a Talent Agency for Robot Actors